All you need to Know about Nurses Training Allowance Arrears & Payments

The Ministry of Health has debunked claims that government owes the Ghana Nurse-Midwife Trainees’ Association (GMNTA) eight months’ worth of allowances.

The Ghana Midwifery and Nursing Trainee Association (GMNTA) in a release, threatened to embark on a nationwide demo should the government fail to pay members within one week.

The National Secretary of the Ghana Nurses and Midwife Trainees’ Association, Lambert Nsobilla, in a Citi News interview said attempts to get the Health Ministry to pay them have yielded no results.

“We are on the cusp of our exams and a lot of our members depend on the allowances to pay their school fees and their inability to do that will stop them from writing exams. The allowance was one of the promises this government made to us in the lead-up to the 2016 election, and they did their best to fulfill it, to some extent. The last payment was made in November 2020, but they were the payments for March, April, and May 2020. So since May 2020, Allowances have come to a halt. The government promised us monthly allowance payments but hasn’t fulfilled them. Also, before the payments were halted there was no defined method. Sometimes they pay after three, four or five months.”

“We are not only going to say that this will be the last resort. If it takes conferences or walking on the streets to cry to government for the over GHS56,000 we are owed [to be paid], we will do just that,” he stated.

But the Ministry has refuted such allegations in a press statement dated April 28, 2021.

“The Ministry of Health wishes to assure the public that it does not owe any student to the tune of eight months as stated in the press release from GNMTA, neither has the Ministry stopped the payment of trainee allowances to students of government health training institutions.

In response to the press released by the Ministry of health in relation to GMNTA DEMAND 8 MONTHS ALLOWANCE OWED TRAINEE NURSES AND MIDWIFES BY THE GOVERNMENT. The leadership of trainee nurses have released another press statement today 28th April 2021 indicating that;

GMNTA have not stated in anywhere that the Ministry of health have stopped the payment of trainee nurses allowance but rather they only lamented on the chronic pace at which it is paid which has lead to the unprecedented arrears owed trainee nurses and midwifes allowance in Ghana.

The government of Ghana through the Ministry of Health have not paid any trainee nurses and midwifes January, February and March 2020 allowance as stated in their press released but rather March, April and May 2020.

The last time the MOH paid allowance was on the 19/11/20 and that was March, April and May 2020 leaving an outstanding one month arrears to clear the completed 2020 students who are even currently on their mandatory rotational service as inclusive.

Therefore GMNTA still stands on their press released of 8 months unpaid arrears of the trainee nurses and midwifes which are June, September, October, November and December 2020 and that of January to April 2021 this year.

However, GMNTA further on added that they are not owed 3 months arrears as they are opened for any national debate in any medium or platform where necessary to clear the erroneous impressing created by MOH.

Kindly read the full statement of the letter below; 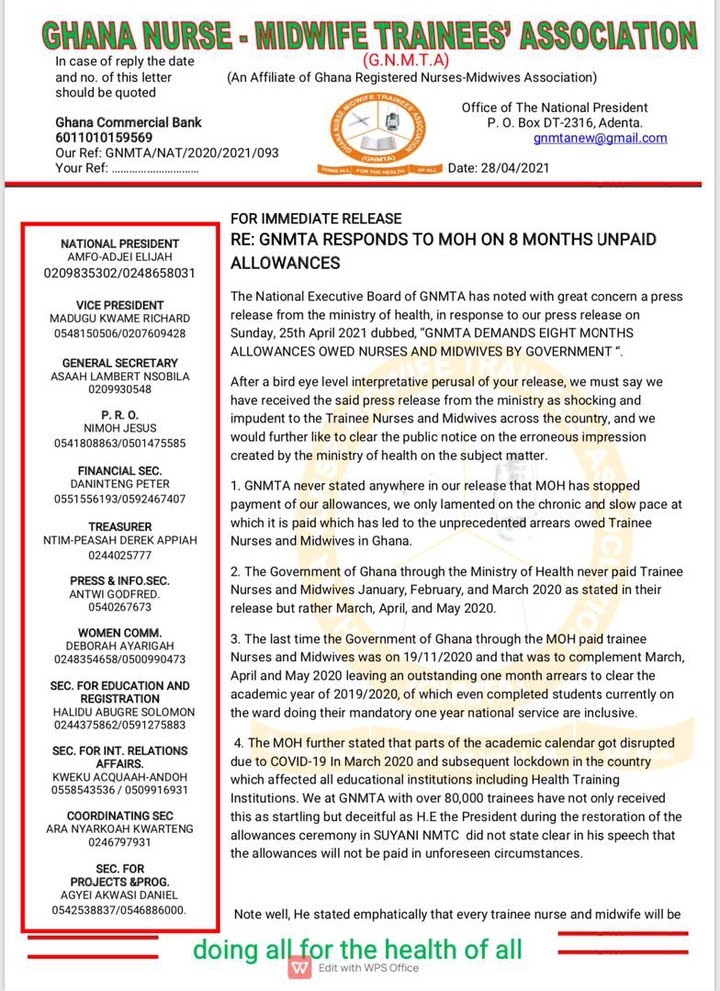 According to the Ministry of Health’s Press statement,
The only payment in arrears for the year 2020 are that of April, May and June to the 2019/2020 final year students who completed their course in December 2020.

Also, arrears for the second cohorts of students (January, February and March) are being processed for payment, Though the ministry in their statement did not specify the specific date in which students will receive their monies. Many students are of the hope that they may be paid by end of day Today or early days of May.

Kweku Jasper
I am a multi talented African son growing up in a cold but hot world, where nothing is what it seems to be. I am an optimist by faith, R.N by profession, Web developer by practice, Tech preacher by decision, promoter by love, blogger by inspiration, photographer by occupation, marketer by calling, sitirist by tribe, entrepreneur by origin, events manager by love, non bias and rich by choice, illustrious by divine arrangement and Ghanaian by law. Simply put, I am all things to all men at all times.
Share
Facebook
Twitter
Pinterest
WhatsApp
Latest news
Lifestyle